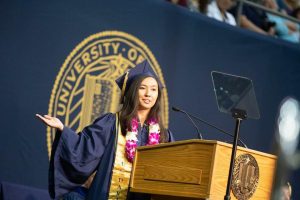 Recognized as the top graduating senior at the University of California, Davis, 2014 Pedrozzi Scholar Emily Eijansantos leaves UC Davis with a Bachelor of Science in neurobiology, physiology and behavior and a decorated collegiate resume. Her academic journey was not always easy, but after a challenging freshman year, Emily found the Davis Wushu group, a performance martial arts club, which played a large part in recovering her emotional well-being. Both a distinguished undergraduate researcher and volunteer with the CONNECTED Clinic, serving mothers with postpartum depression and anxiety, Emily combined her two passions through Davis Wushu’s Fight the Stigma! Charity Showcase, raising money for the clinic through a Davis Wushu performance. Emily reflects on her time at UC Davis and her many activities:

My time at UC Davis was phenomenal. As an undergraduate assistant in the Gomes Lab at UC Davis, I received the Provost’s Undergraduate Fellowship to fund my research project on the effect of ibuprofen, an NSAID, on rat cardiac cells. I also studied the immunoproteasome in Ames Dwarf mice as my Honors Thesis in my senior year, and presented the results of this research at the Biophysical Society’s 62nd Annual Meeting in San Francisco. I volunteered with UC Davis Hospice and CONNECTED Clinic, which serves mothers with postpartum depression and anxiety. 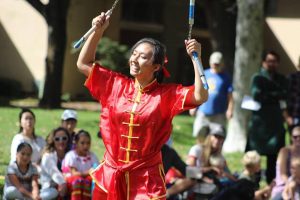 For two years, I was the Public Relations Officer of Davis Wushu, a performance martial arts club on campus, and became Event Chair for Davis Wushu’s Fight the Stigma! Charity Showcase, which raised over $1,000 for CONNECTED Clinic.

Several other CONNECTED student volunteers and I used some of this money to co-found Postpartum Anxiety N’ Depression Advocates (PAN’DA) at UC Davis to continue to advocate for maternal mental health. As an undergraduate student, I had a blast, and for these accomplishments I was recognized as the University Medalist for top graduating senior at commencement.