Astronaut and former engineer at the Lawrence Livermore National Laboratory Jose Hernandez spoke to Pedrozzi Young Scholars at Marylin Avenue School to explain his journey from migrant farm worker to man in space. Jose began his presentation by giving the young students the license to dream big, one of key factors in his own success.

Along with his initial big dream, Jose emphasized that his story was one of hard work and perseverance. His path was full of difficulty and setback, including years of schooling and intensive training and rejection from the NASA program 11 times before finally being accepted.

Jose also stressed the importance of continuing to be engaged in school and having supportive friends and family. Both his father and mother only had a third grade education but both knew how important it was that Jose continue to attend school and settled the family down to live in one place. Additionally, Jose’s father supported Jose’s dream, but also helped him gain clarity of the path and the challenges on the way to achieving his goal. 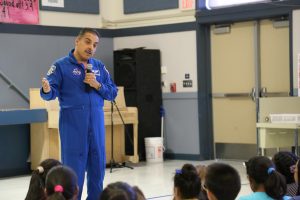 For the Pedrozzi Young Scholars, Jose shared his recipe for success:

Jose started the Reaching for the Stars Foundation which promotes education, especially STEM, to all students. He published an autobiography of the same name Reaching for the Stars: The Inspiring Story of a Migrant Farmworker Turned Astronaut. Currently Jose is the CEO and president of Tierra Luna Engineering. For all his inspirational efforts, Jose was awarded the National Hispanic Hero Award in 2016. The Pedrozzi Foundation is grateful that Jose was able to make time in his busy schedule to speak to the young students.