Due to shelter-in-place orders in response to the coronavirus pandemic, the Foundation’s annual Scholar Recognition Event will be virtual via Facebook Live on Tuesday, May 26, 2020 at 5:00 PM. Guests from near and far are invited to join to celebrate and congratulate the 2020 Pedrozzi Scholars and 11 new Pedrozzi Young Scholars. These youngest scholars, all current fifth graders, were selected for the program due to their focus on being model students. The Pedrozzi Young Scholar program promotes equity in opportunity for high achieving students from Marylin Avenue Elementary School by providing support throughout the students’ middle and high schools years.

In addition to hosting the upcoming virtual event, Pedrozzi board members and staff safely made contactless home deliveries of certificates, pins, event programs, and yard signs to the 2020 Pedrozzi Scholars. Similar deliveries were made to the Pedrozzi Young Scholars who were excited to pose in their new t-shirts next to their Proud Home of a Pedrozzi Young Scholar signs. 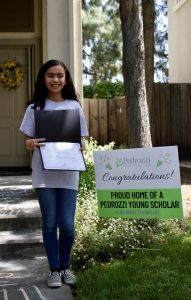 In her touching, handwritten thank you letter, fifth grader Jimena Soltero wrote, “Thank you so much! It’s an honor to be part of this foundation. I understand I have to work hard to achieve anything I want in life. Knowing that you guys will be here for me makes me happy and more confident.”

Pedrozzi Scholar, Kaycee Bilke, is similarly grateful, “I am so excited to be receiving the Pedrozzi scholarship again! After being awarded a community college scholarship in 2017, I became involved with the Pedrozzi Foundation and love everything it does for Pedrozzi Scholars, future applicants, and students in the community. I am honored to call myself a Pedrozzi Scholar for a second time. As I graduate from Las Positas with two associate degrees, I am heading to Cal State East Bay to pursue my degree in human development with an emphasis in early childhood development and a multiple subject teaching credential. Working while being a full-time student is difficult, but I learned so much about myself and what it takes to make my dreams come true. Having Pedrozzi support me again makes me feel that I am constantly supported by my community, and that everything I do is accounted for and recognized. Thank you to everyone at the Pedrozzi Foundation!” Kaycee is one of several undergraduate scholarship recipients who began their college endeavors at a community college.

Generous community contributions have allowed the Foundation to expand its impact through the creation of a wide range of programs to support a college- and career-bound culture in the community. The emergency grants program allowed the Foundation to provide a critically needed laptop to a Pedrozzi Scholar as students were forced to quickly transition to distance learning this spring. Additionally, the Foundation shared information and tips with all its scholars about higher education related resources in the Federal CARES Act. “Anticipating that many college students may need to submit Financial Aid appeals, defer loan payments, and apply for emergency grants at their schools, we immediately shared timely information with Pedrozzi Scholars,” explains Carolyn Siegfried, Executive Director. “Our support for students extends beyond providing critical scholarship dollars.”

The Kim Cupps Memorial STEM Scholarship was awarded to Laurie Liu. The scholarship was established in honor of Kim’s long career at Lawrence Livermore National Laboratory in the Computing Directorate. Kim passed away in June 2019 following a courageous battle with ovarian cancer. Kim’s wife, Gina Bonanno, along with family, friends and colleagues are funding this endowed scholarship. Laurie started her STEM career early as a four-year member of the Girls Who Code club at Granada High School and a 2019 summer intern in the Cyber Security Programs at LLNL. Liu will be attending UC Santa Cruz, majoring in computer sciences with an emphasis in cybersecurity.

Longtime community members Donna and Art Pontau funded scholarships in honor of their parents. The Blanche Embick Pontau Scholarship, established in honor of Art’s mother, was awarded to Destiny Goddu. Like Blanche, Destiny is a veteran. She is a current Las Positas College student and will be transferring to University of the Pacific to complete a degree in Electrical Engineering. While at LPC, she was active with the Student Veterans Organization, holding several board positions, while also tutoring fellow student veterans in the STEM courses she previously completed.

Leobardo Hernandez was awarded the Richard E. Zufan Tool Scholarship established in honor of Donna’s father in honor of his legacy of love and labor. Richard had a lifelong successful career as a die maker, so the Foundation’s partnership with ABC NorCal to award tool scholarships to apprentices in construction trade training programs sparked the Pontaus’ interest. Leobardo plans to enroll in the 5-year electrical apprenticeship program at ABC NorCal. Like Richard, Leobardo has a natural talent for working with his hands and developed a strong work ethic while working in his family pool cleaning business.

The Bill Geyer Memorial Scholarship was awarded to Sara Morris. The Rotarian Foundation of Livermore established the scholarship in honor of Bill’s numerous contributions to the Livermore community, including spearheading the funding of a mobile health unit previously operated by ValleyCare. Like Bill, Sara’s passions include volunteerism and sports. She was a member of the Varsity Lacrosse team at Livermore High School and active member of the local National Charity League chapter. She will begin her journey in the medical field at Las Positas College. 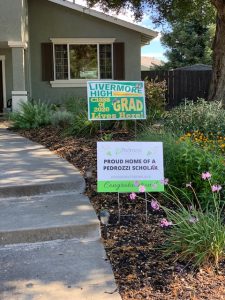 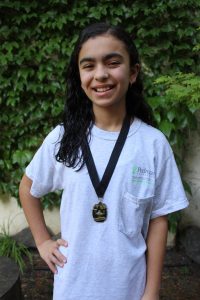